Book review: Marked In Your Flesh 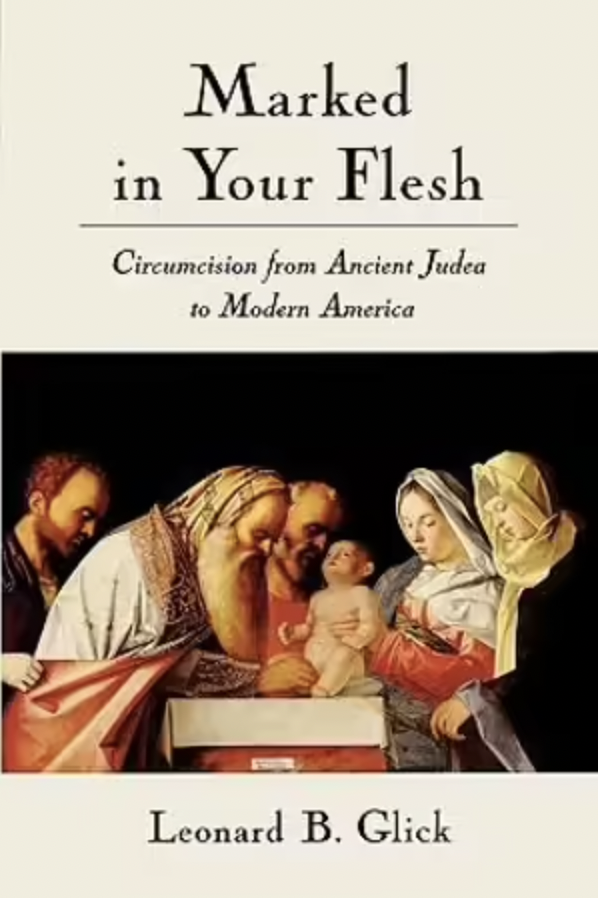 The phenomenon of neonatal male circumcision in the United States is one of history’s richest paradoxes, a puzzle that admits only of partial solutions. Leonard Glick fills in some important pieces with this comparative study of ancient Jewish and modern American circumcision practices. Marked in Your Flesh is Glick’s attempt to document the survival of changing forms of an ancient Judaic religious rite, into the age of modern medicine and individual rights and freedoms.

An historian of ideas as much as he is of genital-cutting practices, Glick traces the origin of neonatal foreskin amputation to late antiquity and the period of Temple Judaism. The “Abrahamic” circumcision covenant—evidently the post hoc invention of priestly scribes—is presented as a late addition to the Hebrew Bible, consistent with the findings of textual criticism. The rite itself, Glick suggests, is probably a vestigial form of “blood sacrifice,” although readers will have to consult the book’s extensive notes and bibliography for anthropological evidence to that effect. Following the destruction of the Temple in Jerusalem (70 CE), consequent diaspora, and the emergence of Rabbinic authority, Glick duly notes, ritual circumcision underwent further profound changes, partly as a reaction against Hellenic influence.

A series of chapters contrasts Jewish and Christian attitudes towards ritual circumcision throughout medieval and early modern Europe. Indeed, a starker contrast is scarcely imaginable, with “Jewish veneration” every bit as rhetorically forceful as “Christian condemnation.” Here Glick presents a litany of pithy quotations, pro and con, drawn from scripture, theology, literature, philosophy, and popular culture. Little social context is provided, or analysis made of these rhetorical statements. Christian opposition to ritual circumcision has been vehement, to say the least, and Marked in Your Flesh therefore shines a light on what Freud, certainly, took to be the cultural root of antisemitism.

The book’s central chapters detail a turning point, around 1870, when the ancient Hebrew religious rite was refashioned for broader cultural consumption in the image of a modern, therapeutic (and subsequently, prophylactic) medical procedure.

To this end Glick includes citations of the biblical Moses, recast as heroic “proto-physician” in the pages of prestigious American (but not European) medical journals during the closing decades of the nineteenth century. Glick shows that in America, unlike Europe or Britain, the emergent medical discourse on male circumcision was dominated by Jewish physicians, typically advocates—even (especially?) those who remained, as Glick suggests, demonstrably ignorant of the ritual meanings of foreskin amputation. Glick does not venture to explain exactly why an American audience, in particular, should have been so keenly receptive to the rhetorical appeals of Jewish physicians—an interesting question given the longstanding history of opposition to ritual circumcision, amply documented by Glick in previous chapters.

Glick trained and served as a physician before embarking on a professional career as an anthropologist. Marked in Your Flesh is not a specialist work of anthropology, theology, medical history, discourse analysis or cultural studies. Rather, it intersects with all these fields and more, with a broad readership in mind.

Glick’s approach to source materials is eclectic, and the focus of closing chapters tends to become increasingly diffuse. At last Glick turns his attention to 1990s television sitcoms Seinfeld and Sex and the City, material included to underscore Glick’s diagnosis of profound cultural malaise, a pervasive sense of unease surrounding what is still, by and large, a “taboo topic.” Informed readers may lament Glick’s failure to address contemporaneous developments in the field of biomedicine, such as the production of human tissue engineered from neonatal foreskin fibroblasts; such powerful economic drivers of genital cutting in America remain, at best, marginal concerns.

Although Glick might have fleshed out tentative links that have been made between infant male circumcision and patriarchal and/or imperial power, such provocative lines of inquiry are hinted at almost parenthetically, together with the author’s own religious and political views (Glick is both a Reform Jew and “intactivist,” to suggest but two of his book’s ideal audiences). Marked in Your Flesh tends to play it safe, while still providing ample grist for the mill of social-religious and medical reform. Like other book-length histories of male circumcision, Glick’s book stands on its own merits as an invaluable, frequently startling, compendium of documentary research.

Marked In Your Flesh is available on Amazon.

Chris Coughran is an independent researcher.