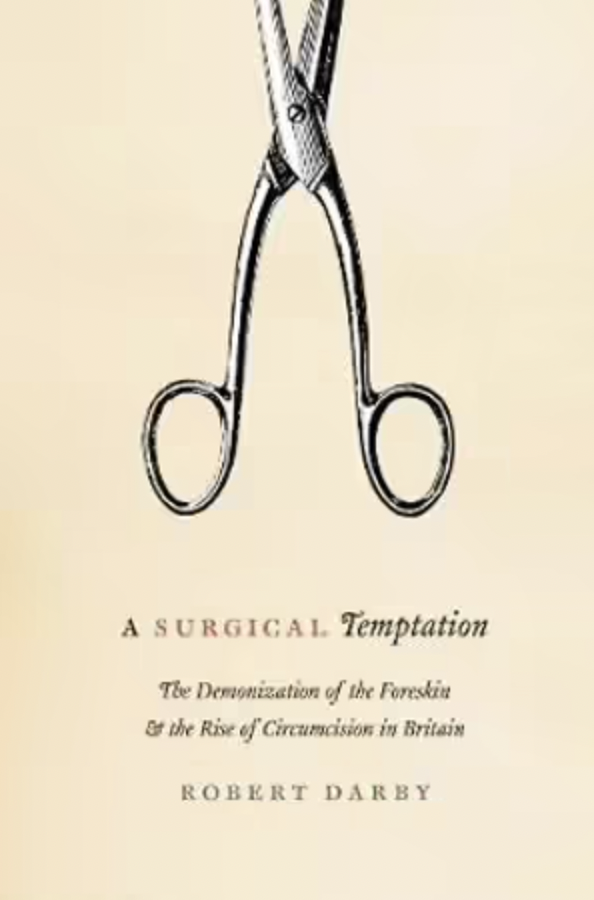 Robert Darby. A Surgical Temptation: The Demonization of the Foreskin and the Rise of Circumcision in Britain (Chicago: Chicago University Press, 2005).

It has become de rigueur, at the level of transnational elites, to promote male (but not female) circumcision as a prophylactic in the fight against HIV, albeit only in impoverished nations having darker-skinned populations and a vexed history of European colonisation. Even in sunny Australia—where the surgery is not encouraged as a HIV prevention measure—male (but not female) circumcision is still considered a “medical” procedure, albeit only for the purposes of health insurance and taxpayer-funded Medicare benefits. The transmogrification of a prehistoric (Stone Age) ritual into a lucrative staple of modern (Anglophone) medicine has long puzzled anthropologists and medical historians, such as Leonard B. Glick (Marked in Your Flesh, 2005). On this score, an invaluable contribution has been made by the late Robert Darby, a consummate historian of sexual medicine, in his landmark work A Surgical Temptation: The Demonization of the Foreskin and the Rise of Circumcision in Britain.

Darby first presents the European background, marshalling sources from antiquity and the early-modern period in order to demonstrate something of the high regard in which the foreskin, an integral part of male sexual anatomy, was long held by Englishmen (and women). Darby’s goal is to establish that historical attitudes towards the male body and its sexual functions—notably, the emission of sperm—bear little resemblance to those promulgated in the nineteenth century under the aegis of an emergent medical profession. Given this broader historical perspective, “the sudden vogue for male circumcision in Victorian Britain” (3) indeed constitutes a significant aberration in the history of British masculinity.

With a view to either cure or prevention, imaginary diseases (spermatorrhea, congenital phimosis)—together with false aetiologies for real ones (syphilis, epilepsy)—became the stock-in-trade of medical and popular discourse during the Victorian period. Scientific advance—particularly in the field of sexual medicine—was not only thwarted, Darby says, but effectively reversed by the ascendancy of the surgical profession in Britain, where the “rise of circumcision depended … on a serious regression in medical knowledge, including loss of understanding about the normal development of the penis and the pathologisation of normal sexual function” (318). As Darby suggests, the Victorian penchant for amputation of “vestigial” organs—appendix, tonsils, colon, foreskin, clitoris, etc.—rested not on any newfound anatomical or physiological understandings, but on pious perversions of the science of evolutionary biology.

A Surgical Temptation is the product of meticulous historical research, constructively engaging with the work of contemporary historians as well as drawing on a wide variety of primary sources: British medical journals, Victorian sex education and parenting manuals, moral-reformist tracts, literary texts both highbrow and “philistine.” Few, if any, book-length treatments of male circumcision rival Darby’s impressive feat of scholarship. His knowing critique of Victorian sexual medicine is unrelenting, but seldom overbearing. Even occasional detours—into speculative literary biography, for example—do not detract from the achievements of Darby’s “pioneering essay” (xi). A Surgical Temptation deserves a place in any library where histories of religion, medicine, sexuality—and indeed, genitalia—converge. Perhaps the definitive work on its subject (to date), this book is essential reading for perplexed survivors of routine “medical” circumcision.

A Surgical Temptation is available on Amazon.

Chris Coughran is an independent researcher.