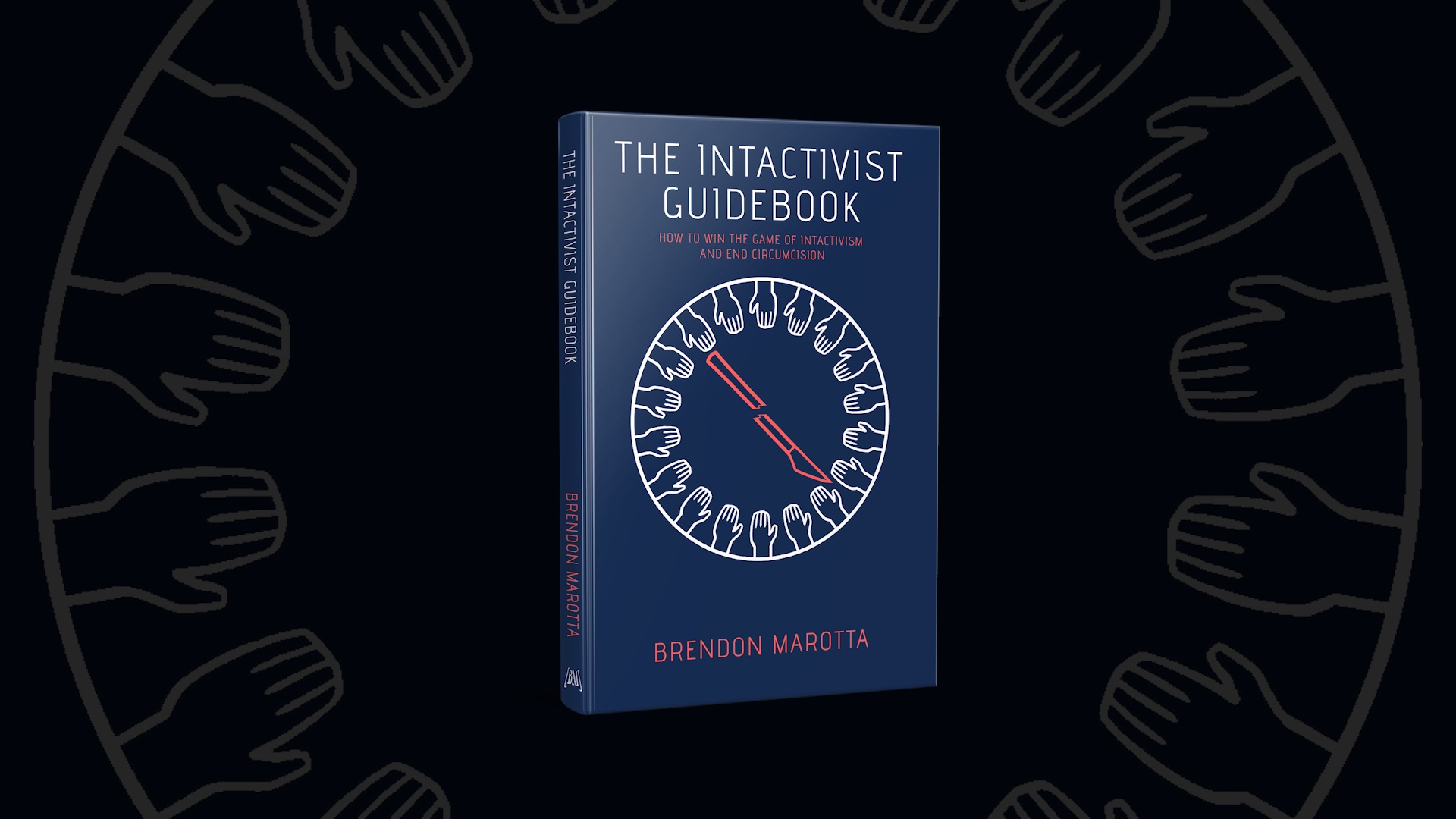 Brendon Marotta is the director of the award-winning documentary American Circumcision, which has appeared on both Netflix and Amazon Prime, and author of The Intactivist Guidebook: How to win the game of intactivism and end circumcision. Darbon Institute Chair Jonathan Meddings recently spoke with Marotta about his book.

You directed American Circumcision. How did that creative process compare to writing the The Intactivist Guidebook?

With American Circumcision, there was a creative process of thinking about this issue that occurred with the research. Because it was a film, I had to gather my research by interviewing people. The Intactivist Guidebook came out of a year of thinking about how to create change and reading about activist strategies. It benefited from the previous 6 years of observation. Eventually, I had enough thoughts I couldn’t hold them in any longer, and it was actually easier to write than not write.

Do you have any tips about the self-publishing process for aspiring authors?

Writing a book does not have to take long. Can you write a blog post a day? A long blog post is 3000 words. A book is 30,000-90,000 words. That is ten to thirty days of consistent blogging. The first draft of my next book clocks in at 86,000 words and I wrote it in 50 days. That said, the thinking that goes into the book could take longer.

Selling the book is as important as writing the book. I actually haven’t done a lot of selling for The Intactivist Guidebook, because the book functions almost as a letter to people I’ve been talking to for nearly a decade. The decade of communication is the ‘marketing’ for the book. The next one is intended for a broader audience, so you will see more push for that.

In the book you talk about the ‘spectrum of allies’ and how people in the intactivist movement should be tailoring their messaging to respond to different groups on this spectrum. Can you briefly explain what the spectrum of allies is, and provide an example of messaging you think has and hasn’t been tailored well?

Different audiences are in different places in regards to this issue. They are along a spectrum from active allies (people actively working for your cause), to passive supporters (neutrals or people who have not heard about the issue), to passive opposition or supporting circumcision, to actively working against your movement.

In what I call a “share the message” model of activism, there are only two groups – those who agree with the Intactivist movement and those who don’t, and there is no need to “preach to the choir.” The spectrum view recognises that even within those who agree with you, some are taking action and some are not. Every time you ask for a donation or invite someone to an event, you are “messaging” and that message needs to be different because it has a different goal.

The biggest misfire in communication often isn’t what is being said, but who it is being targeted to. Active opposition and groups that make their profit through circumcision are not going to be as open to the message as a neutral person or organisation. Spending all your time trying to convince your enemies to love you is a losing strategy, when there are lots of people who would like to hear what you have to say. It is the same principle for any artist or business: don’t worry about your haters, talk to potential fans.

You argue we need to play the long game to end circumcision. Just how long do you think it will realistically be before we achieve that goal? Are we talking 50 years, 100 years, more? What parallels can be drawn with other successful movements?

There is no timetable. How long a goal takes depends on what strategy you are using to get there and how your goal is defined. In the book, I define the goal of the movement as ending circumcision, give multiple “win conditions” under which that could occur, and show how that the goal is dependent on resources – people, money, and skills. How long it take depends on how quickly we can amass those.

Put it this way: if you had the advertising budget of Coca Cola or the entire slate of Marvel films, how much faster do you think you could change public perception on an issue? Probably much faster than a few people with signs working out-of-pocket. If resources bring you to the goal faster, will the current strategy bring those or not? If not, could you use what you have to get more resources?

There is a trial and error to movements. I almost included something called the Marshmallow Experiment in the book, but it feels relevant here. In the Marshmallow Experiment, a team is given some uncooked spagetti, tape, and a marshmallow and told to build a structure that makes the marshmallow as high as possible in fifteen minutes. They’ve done this experiment with teams of CEOs, business majors, professionals… You know who consistently does the best? Kindergartners. Why? Because they spend zero time in adult status games and just try stuff to see if it works. As a result, they try a dozen different combinations adults would never try during their fifteen minutes.

In a way, movements are the same. A marketing team would not come up with many of strategies that activists have discovered. Look at the historical material of certain movements, like gay rights, civil rights, or even the abolitionists. A lot of it doesn’t work. Those movements were experimenting. They were testing messages to see what worked. So how long does it take? I don’t know. A failing strategy never gets there, but a good one might be very fast. That is why it’s important to have a way of measuring what success is. I define it as bringing in more people, money, and skills. Growth is success. If you can measure that, the rest is just play and learning.

You also write about healing. Can you expand on that a bit? Given how far off achieving the goal of the intactivist movement likely is, how important is healing to ensure that intactivists and their movement can go the distance?

You cannot win without collaboration. Movements are groups of people, and for groups of people to work together, they have to collaborate. To collaborate there has to be a connection or relationship. The biggest barrier to relationships is unhealed trauma and negative emotional patterns. Healing is how you change this. If you heal, you have better relationships, which creates easier collaboration, and by extension a better movement. Oh, and this whole movement exists because people were traumatised in childhood, so we all know it’s there.

I firmly believe that people create their own reality based on their mindset. If you believe that “there is no money to work on this issue” or “no one will ever listen to us” those are self-fulfilling beliefs that will continue to play out until you change them. If you go back to when you first decided those beliefs (which you can with techniques like timeline therapy or Completion Process), you can change them and create a different reality.

The good news is that this puts success in your hands, rather than external factors. This isn’t to say external factors don’t matter. But the internal is how you get there. People often want to put some external goal before their internal state. “I can’t do healing, I have to focus on getting attention for this issue!” Okay, what parts of you believe you can’t do that? What reasons are you giving for why that’s difficult? If we can shift those internal blocks first, it’ll be much easier to accomplish the external.

You end the book with a call to action. Aside from reading your book to learn more, what actions can people take to progress the intactivist movement, or some other movement they are part of?

When you meet someone who is interested in the movement or issue, get their contact information, build a connection with them, and bring them into whatever group you are working with.

I say this as someone who struggles with connection and relationships. I’m an introvert writer on the autism spectrum. “Build relationships and connect with people” is not what I’d like to be the key to success, but after looking at the issue, I’m certain it’s true.

I’d also add: if you suck at this like me, find someone else who is good at it and collaborate with them. I know I’m in introvert, but I can make a film that gets on Netflix and knock out a book in 1 to 2 months. Most people don’t have that skill. Rather than trying to be good at everything, collaborate with others who are good at your weaknesses.

The power of organisations and movements is that you don’t have to do it all by yourself. Work together as much as possible.

What’s next on your professional plate?

My next book explores circumcision through the lens of critical theory. It’ll come out between November 2020 and March 2021. I’m also publishing a novel I co-wrote with my dad that has nothing to do with activism, but is just a family-friendly Christmas story. After that, I’m writing a novel and going back to films.

The Intactivist Guidebook is available on Amazon and in all good book stores.

Read this review of the book to learn more.